We are a multicultural, multidisciplinary team of filmmakers, ethno-psychologists, visual anthropologists, artists, physical theater performers, choreographers, musicians, cultural mediators / interpreters, social innovators, design thinkers, and IT developers & designer - all engaged in social & environmental matters. Our main team has over a decade experience with approaching and empowering the most vulnerable communities, living with them for long periods, gaining their trust and building strong bonds. From refugees and immigrants in Europe, to very remote indigenous communities in the Amazonian forest, to the jungles and seas of SouthEast Asia, to impoverished slums of Africa and Latin America, we are passionate about letting them rediscover their power and safeguard their valuable traditional wisdom and culture, in an alienating globalized world. We are engaged in bringing those valuable experiences, voices, stories, and artistic expressions out of those marginalized communities to the rest of our societies, in order to bridge gaps of prejudice and show the ways for a common future, where we learn from each other and grow together. 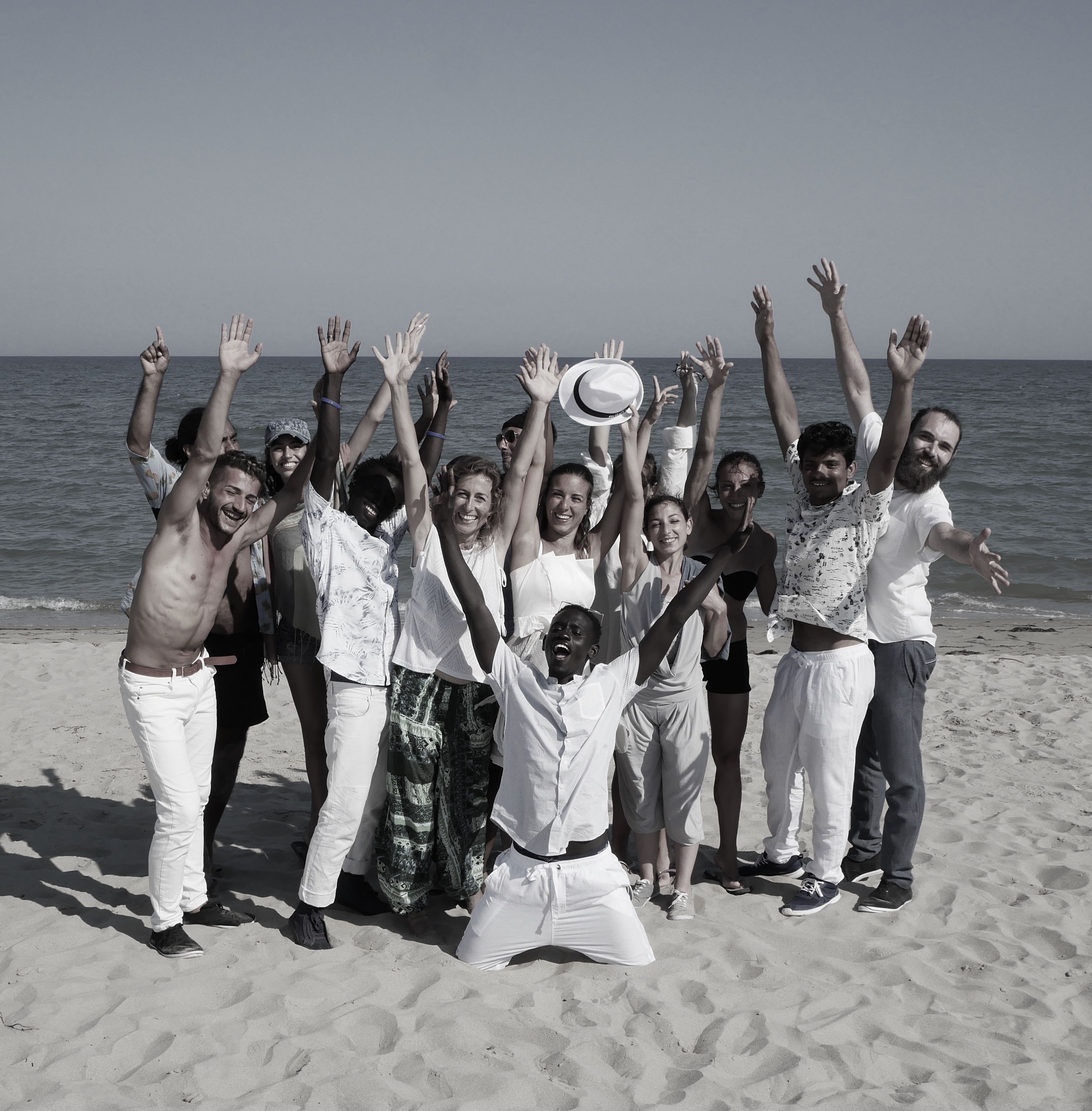 We are a multicultural, multidisciplinary team of filmmakers, ethno-psychologists, visual anthropologists, artists, physical theater performers, choreographers, musicians, cultural mediators / interpreters, IT developers and designers, all engaged in social & environmental matters. Our main team has over a decade experience with approaching and empowering the most vulnerable communities, living with them for long periods, gaining their trust and building strong bonds. From refugees and immigrants in Europe, to very remote indigenous communities in the amazonian forest, in the jungles and seas of SouthEast Asia, in impoverished slums of Africa and Latin America, we are passionate about letting them rediscover their power, safeguard their valuable traditional wisdom and culture, in an alienating globalizing world. We are engaged in bringing those valuable experiences, voices, stories, artistic expressions out of those marginalized communities, to the rest of our societies, to bridge gaps of prejudice and show the ways for a common solidal future, where we learn from each other and grow together.

Greek and French. As an ethno-psychologist (Masters in Clinical Cross-Cultural Psychology from the University of Paris 5), she has worked in Paris supporting immigrant families, in the team of pioneer Prof. Marie-Rose Moro and in South Italy with refugee unaccompanied minors. As a consultant at UNESCO, she has facilitated the socio-educational integration of street children in Madagascar. She holds a Masters in Documentary filmmaking and visual anthropology (trained by Jean Rouch’s team at Paris 10 University). As a founder of One Vibe Films, she has written, directed, and produced creative documentaries for international broadcasters and for NGOs – mainly shot in remote areas of Southeast Asia, Europe and Africa. As a founder of Diversity United, she designs & implements media & raising awareness campaigns and community engagement & capacity building projects for vulnerable groups. This includes using Participatory Video workshops offering various artistic outcomes, creating interactive cross-media, as well as conceiving & designing digital platforms for social change (initially inspired as Covid-19 solutions). The above are further developed and implemented with the rest of the team. She speaks English, French, Greek, Italian, Spanish, Indonesian and Malay.

Sea Gypsies joined the “Why Poverty?” series, led by BBC. It was covered by 69 broadcasters reaching over 200 countries worldwide.
Greece: Days of Change nominated by the Millennium International Documentary Festival, for the “Workers of the World” award (Belgium), and by Docs Barcelona for the “New Talent” award (Spain). Screened in 60 cinemas around Spain, as “Documental del mez”, in other cinemas across Europe with “Moving Docs”, and broadcasted prime time in 6 European countries.
Anti-bullying campaign, cross-media interactive educational tool (idea-design, multiple end scenarios, direction, production) for the EU. Officially used by the Greek Ministry of Education as well as in 6 other European countries.
Walking in light, a poetic video-dance performance inspired by Participatory Video (PV) workshops with young refugees hosted in shelters in South Italy.
BeLeaf VR 360, a virtual reality poetic film, part of MaTerre VR Experience, officially included in the cultural program of European Capital of Culture 2019, Matera, Italy. Selected for the “Maker Faire Rome – European Edition” and included in Rai Cinema VR app (under Maker Faire, Ma Terre VR Experience, BeLeaf)

Peruvian cultural mediator & government consultant as an indigenous people expert in Latin America. His most recent works are focused on consultancies and creation of educational projects for the Safeguarding of Intangible Cultural Heritage for CRESPIAL – UNESCO in Latin American countries.
He works independently in the documentary and institutional field. His personal works range from short fiction, to anthropological audiovisual documents and experimental works. He is specialized in the development of audiovisual, technological educational, advertising and anthropological projects.

French and Greek, Senior Developer & Natural Language Engineer in AI (Artificial Intelligence). He holds a Master in Project management and programming from the University of Amiens in France. He has over a decade experience as a freelance developer. For Diversity United, he has programmed an EU-funded interactive educational tool against bullying on a digital cross-media platform. Its use is officially adopted by the Greek Ministry of Education for Greek schools, as well as in 6 other European countries. With Omilia, he leads teams of developers in Artificial Intelligence prototypes for leading international investment banks. He is a key team member when it comes to designing and programming interactive cross-media and digital innovative solutions for solidarity and social change.

Brazilian, born in Peru, he is specialised in social & educational innovation, prospective & strategic planning. He is the owner & Chief Innovation Officer of Genios360, a social innovation and technology company, headquartered in Brazil, which develops tools for transformation and improvement in different areas of society in Latin America in partnerships with people and companies allied to this purpose.

He is a designer of innovation & cultural transformation processes to develop smart strategies and solutions in cities, institutions, and companies. Creator & partner of different ventures, products and technological solutions in several countries. Founder of Lab Growing to train agents of growth, innovation and continuous improvement; currently developing the first workshops in Brazil, to be scaled in Latin America & Europe. Founder of IQM (Ideas that improve), an incubator for the creation of Fabricas Boutique and Startups in the areas of technology, innovation and social entrepreneurship. Writer of published books; currently working on a new format for launching other books. Trainer for institutions and companies in the areas of development, planning, strategy and implementation of transformational projects. Aligned to Diversity United’s mission to build an innovative, transformative and collective culture that can generate real changes in our societies, based on medium and long term processes.

Greek, she graduated from the “Contemporary Theatre of Athens” Theatre School of George Kimoulis and from the physical theatre school “Ecole Internationale de Theatre Jacques Lecoq” in Paris.

She is a founding member, performer, and artistic collaborator of the physical theatre group Patari Project. As a performer she has worked in Greece and France with directors such as Sofia Paschou, Kostas Fillippoglou, George Kimoulis, Esther Andre Gonzalez, Angeliki Kounenidaki, Marcello Magni, Lilo Baur, and Caroline Reck, among others.

As an assistant director, she has worked with directors Kostas Fillippoglou, Vassilis Mavrogeorgiou and Thomas Moschopoulos. As a movement director, she has worked with the theatre groups Patari Project (Little Theatre of Ancient Epidaurus), SoMMA (Bob Festival) and Mikriskini (Bob Festival & Arti Theatre) and with the director Anna Papamarkou (Alkmini Theatre).

She has been teaching physical theatre, movement, and improvisation to professional actors, amateur actors, teenagers and children since 2005. She taught – on a volunteer basis – physical theatre, improvisation, and movement for a year to a group of refugees in KETHEA MOSAIC, in Athens. Together they created in 2009 “Endless roads” (‘Δρόμοι χωρίς τέλος’), performed in Chora THeatre, in the “Going Youth Festival” (Technopolis) and in “Contemporary Theatre of Athens” – where they did a joined performance with a group from the National Theatre’s “Young People Workshops”.

Greek, she studied piano at the National Conservatory in Vathis Square, specialized in Music Kinetics at the Moraitis School and with a scholarship at Mozarteum University in Salzburg (Advanced Studies in Music and Dance Education – Orff Institute). Then, wanting to further explore the relationship between music and movement, she studied Physical theater at Jacques Lecoq School and with Philippe Gaullier in Paris, as well as movement analysis and Laban dance notation at the Conservatoire National de Musique et Dance de Paris.
Today, she combines music, movement, and theater in her artistic and educational activities. She teaches physical theater and music kinetics to children and adults. She collaborated as a clown – musician with Clowns without borders Sweden (2015-2018) and founded their Greek mission, the WHO NOSE team. During this time, the group performed 65 circus performances and seminars at 14 refugee shelters and hotspots throughout Attica, giving a smile to more than 8,000 people.

Syrian, based in Greece, with over 20 years experience. He has taken part in more than 40 films (short and feature length), many of which have participated, and some awarded, in major film festivals (Berlin, Locarno, Toronto, and many others around the world). His documentary work has been aired/commissioned by major broadcasters like BBC and ARTE. He is a native speaker of English, Greek, Arabic, and French to a lesser degree. He has worked as an editor at post production firms for 8 years, and as Head of Post Production for 6 years. During this time, his editing work mainly consisted of TV commercials, video clips, and corporate videos. Kenan has experience in other fields including Re-recording Sound Mixer, Visual Effects Supervisor, Production, and Location Sound Recording. He has been invited to lecture on Editing and Sound Design and is a member of the Greek Film Academy.